Situated on the eastern rim of the Ngorongoro Crater, in the volcanic highlands of Tanzania, Ngorongoro Sopa Lodge is located 220 km from Arusha, approximately 4 hours drive and 40 minutes by air, with another 2 hour transfer from the airstrip to the lodge.

The Ngorongoro conservancy is located in the Crater Highlands of Northeastern Tanzania. The conservancy, an intrinsic part of the Serengeti ecosystem, borders Serengeti National Park to the Northwest and is on the path of the annual wildebeest and zebra migration. From the vast Serengeti National Park plains to the Eastern arm of the Great Rift Valley, the Ngorongoro Conservancy Area stretches out into a stunning area of 8,292 Sq. KM. Its magnificent savannah plains, highlands and forest canopies harbour the Big 5, including a dense population of lions, wildebeests, zebras and gazelles. 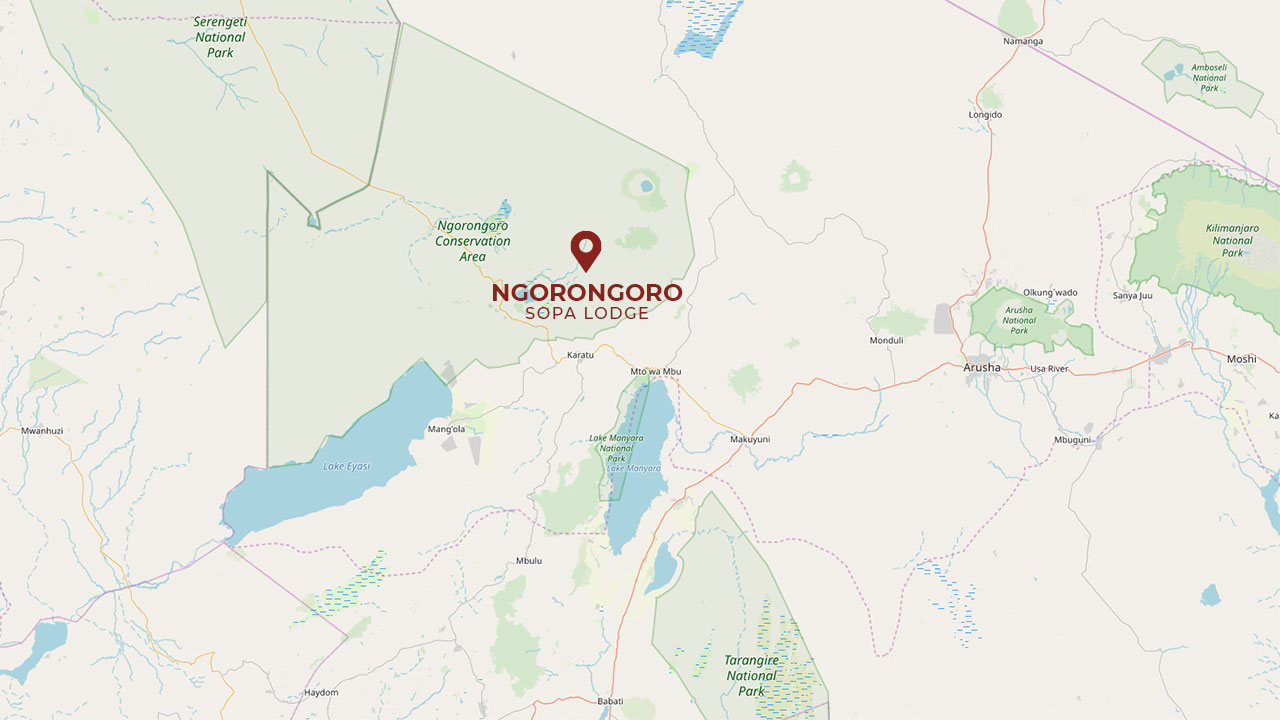 Had it not become the world's sixth-largest unbroken caldera, then what is now known as the Ngorongoro crater could have been a towering volcanic mountain, as high as Kilimanjaro.

The crater is the flagship tourism feature for the Ngorongoro Conservation Area. It is a large, unbroken, un-flooded caldera, formed when a giant volcano exploded and collapsed some three million years ago. The Ngorongoro crater sinks to a depth of 610 metres, with a base area covering 260 square kilometres. The height of the original volcano must have ranged between 4,500 to 5,800 metres high. Apart from the main caldera, Ngorongoro also has two other volcanic craters: Olmoti and Empakai, the former famous for its stunning waterfalls, and the latter holding a deep lake and lush, green walls.

On the leeward of the Ngorongoro highlands protrudes the iconic Oldonyo Lengai, an active volcano and Tanzania's third highest peak after Kilimanjaro and Meru. Known to local people as the Mountain of God, Mount Lengai's last major eruption occurred in 2007. At the mountain's foot is Lake Natron, East Africa's major breeding ground for flamingoes.

The conservancy boasts a harmonious co-existence of man and beast as it is home to the nomadic Maasai pastoralists. Within the conservancy are other renowned natural wonders and heritage sites, including Oldonyo Lengai Mountain, Lake Natron, Olmoti and Empakai craters, and the Olduvai Gorge. The Olduvai Gorge is a famous archaeological site where the Neanderthal man, the Zinjanthropus, whose skull was discovered at the gorge by Dr. Leaky in 1959.