Situated on the shores of Lake Naivasha, a fresh water lake whose surface area depends on the rainfall, the resort is 125kms from Nairobi or just over an hour’s drive on tarmac roads. 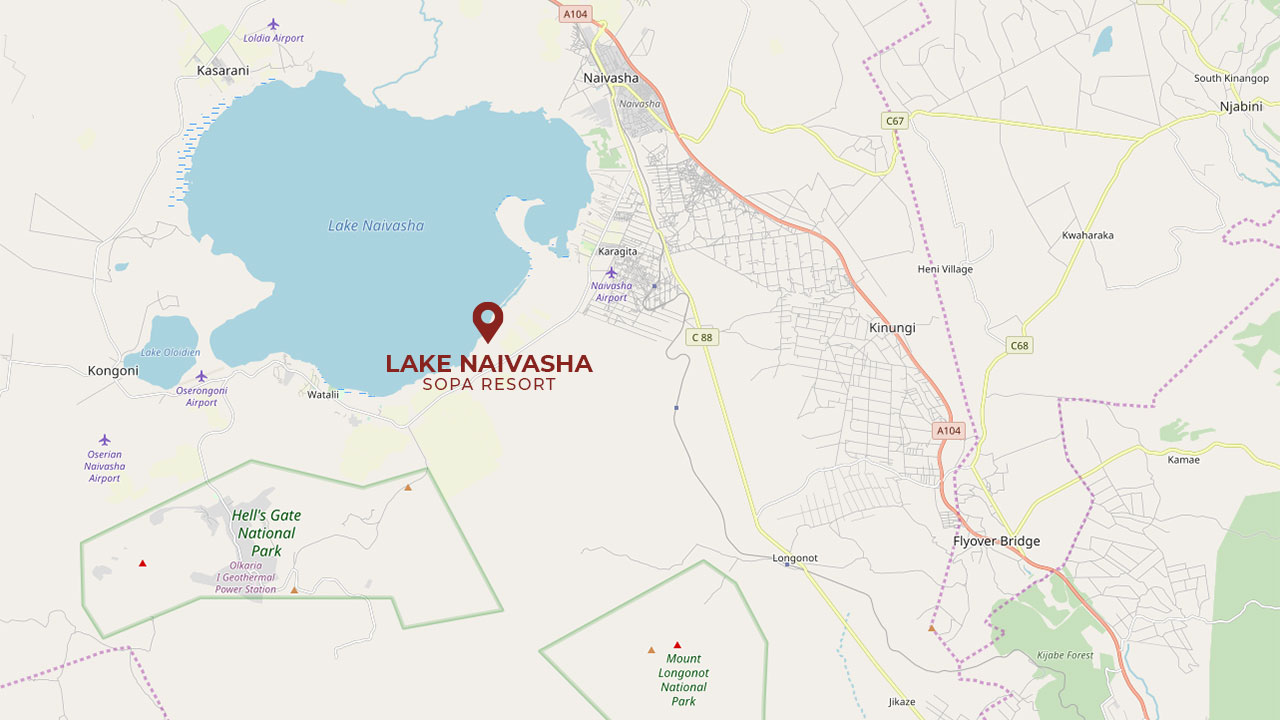 Lake Naivasha is a freshwater lake in the Kenya section of Africa’s Great Rift Valley, and is located north west of Nairobi with the town of Naivasha on its north eastern shore. At 1,890 meters (6,200 ft) above sea level, the lake is at the highest point in the Kenyan rift, and is set in a complex geological combination of volcanic rocks and sedimentary deposits from a much larger Pleistocene era lake. Because the outlet for this ancient lake, now called Njorwa Gorge, is today much higher than the lake, the original Lake Naivasha must have indeed been a truly vast expanse of water. The gorge now forms the entrance to the Hell’s Gate National Park which, for obvious reasons, today contains some spectacular examples of water and weather-worn rock formations as well as an abundance of flora and fauna to include some extremely rare, resident breeding pairs of Lammergeyers, otherwise known as Bearded vultures.

Apart from transient streams, Lake Naivasha is fed by the perennial Malewa and Gilgil rivers and, most unusually, it now has no visible outlet. However, it must be assumed that such a large body of water has to have an underground outflow through a volcanic fissure or similar somewhere beneath the expanse of its lake bed, and it has been suggested that the water emerges through the fresh but hot water springs at Lake Magadi, an otherwise brackish and pinkish coloured soda lake 120kms to the south.
Because this is a volcanic area, as witnessed by Mount Longonot, an extinct nearby volcano to the south east, and ancient fumaroles – including the tiny but spectacular Crater Lake – to the west, Kenya is blessed with the presence of the Olkarria Geothermal electrical generating complex – high in the hills just to the south – which feeds massive amounts of much needed power into the national grid.

Since the lake’s underground outflow might perhaps be limited in size, the lake has a surface area of between 140 and 180 km² depending on the rainfall although, and in years gone by, it has been known to either dry up altogether or to expand exponentially during the somewhat cyclic curse of the El Nino weather system which creates flood chaos with its multiple or lengthy torrential rain storms. It has an average depth of 6 meters (20 ft), and its deepest point of 30 meters (100 feet) is off Crescent Island which is a wildlife conservation area.

Lake Naivasha is home to a wide variety of wildlife including a sizeable population of hippos which usually invade our property during their nightly forays for food. Being a freshwater lake, it also has a healthy fish population to include Black bass, Tilapia and Crayfish which attract a variety of fish-eating birds such as Long-tailed and Great Cormorants, along with Fish Eagles, Pelicans, and various types of Kingfishers.

Naivasha is also a good place to see the Grey-backed fiscal. This bird replaces the Long-tailed Fiscal in areas with higher rainfall. Also to be seen in the area is the Black-lored Babbler. The Naivasha race tends to show pale tipped feathers on their heads which gives their appearance a somewhat frosty or haloed effect, and it is believed that this variation may be the result of hybridization with Northern Pied Babblers at some point in the past.